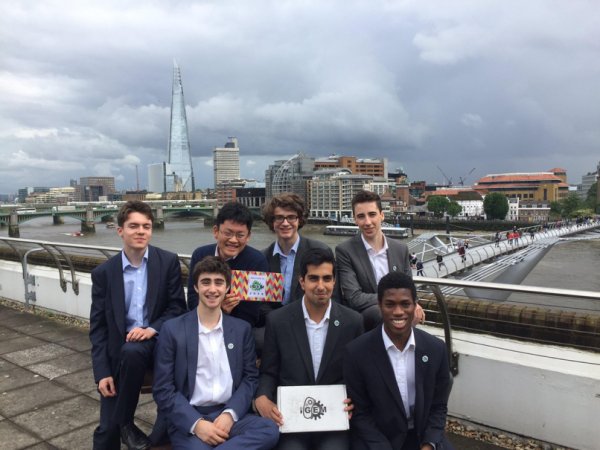 “If there was a World Cup in molecular biology, this would be it!” said Adam Zivanic, project supervisor and Head of Biology at the school. Four CLS pupils, competing alongside undergraduate and postgraduate research teams, without any concession or allowance for their age, were the only team that isolated and registered a novel section of DNA in a normal school laboratory.

The school team were presented a silver medal at at the iGEM (International Genetically Engineered Machine) competition in Boston, MA over the weekend of 29th October. The competition took place in Boston, 27-31 October, and the boys presented their findings at 9am on 29 October.

iGEM have stepped in to provide a registry for standard biological parts in order to unify global research in the new field of synthetic biology. The school project was in the field of photosynthetic fuel cell technology to build the foundations for what has the potential to tackle the world energy crisis. By taking a step forward in providing a sustainable energy source with a negative Carbon Footprint, we are helping to change the World. At heart, the project is simple: modern solar panels leave a lot to be desired due to their low efficiency, their bulkiness and their high price. Biological Photovoltaics have the potential to provide a far cheaper, simpler energy source that can take up Carbon Dioxide from the air instead of pumping more into it. If only scientists would modify some organism so that it can be used efficiently inside one. This is where we come in.

The standards are extremely high for submission to the registry and very few schools were able to isolate a completely new biological part. Clemens von Stengel, a CLS pupil had been working on a project with his teacher’s old supervisor at Cambridge when he asked the Head at CLS, Sarah Fletcher, and his teacher Adam Zivanic if he could put a team together. “The field of synthetic biology did not exist when I was at university!” Adam exclaimed. Indeed, a high degree of competence in molecular biology, mathematical modelling, and computer programming, as well as a huge time commitment are needed; no wonder that few schools worldwide were able to complete a submission. CLS are extremely grateful to Imperial College for their support and providing the certification (required for genetic modification) and feel that they have developed a close relationship with the University for continuing their initiative. Imperial College, of course, submitted their own highly resourced team in this hugely prestigious event – and came out on top!

Clemens, as Project Leader, was joined by Jake Mendel, Cameron Anderson and Naail Kashif-Khan; the lucky team members that travelled to Boston, where they were able to wander the corridors of Harvard during the convention. Clemens expressed his enthusiasm for the project, “By soldiering on with cells that demanded -80ºC freezers and ligations that refused to yield any results for three weeks in a row, by coming in at the crack of dawn and leaving after the sun had long since set, by sacrificing our well-earned summer rest while our friends went off on holiday, we have achieved more than we could ever have hoped for.”

The fact that the team is comprised from only one school, unlike many of our competitors, has proved advantageous. Our students have been able to meet up at incredibly short notice at times and have gone through the inevitable ups and downs of microbiology as a coherent unit. On the day of their presentation, Adam proudly commented on how the boys performed on the day: “Numerous people came to tell us they were amazed how much we achieved. Everyone working with “our” organism was amazed how far we got. The boys performed brilliantly throughout.” When asked what next, he replies “for next year the boys are putting together a truly interdisciplinary team of Biology, Maths, IT & Computing and also Politics students”. No time to rest on their laurels, then!

If there was a World Cup in molecular biology, this would be it.